Get connected with a clothing factory in Canada today! 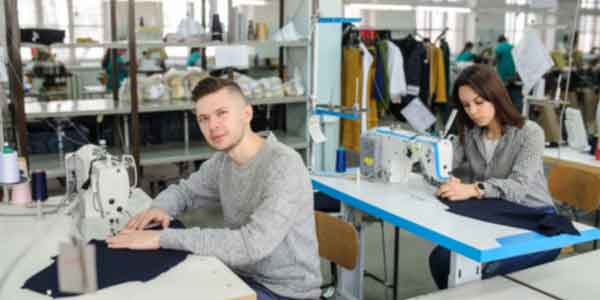 World Clothing Manufacturers (WCM) connects fashion and apparel designers with the most appropriate textile vendors, knitters, sample makers, hardware suppliers, and clothing factories in Canada. With years of knowledge and experience in the clothing industry, WCM fully understands the typical challenges and acknowledges that the clothes manufacuring business is vast, often complex, and consistently inconsistent.

Small businesses account for 99 percent of all companies in Canada. To put it into numbers, we are looking at millions of businesses that are categorized as SMEs, that create millions of jobs on an annual basis; out of these, we have a rough estimation of tens of thousands of establishments that are categorized as clothing manufacturers for small businesses or retailers. The combined revenue of all the amounts as mentioned above to a staggering $186B.

The availability of clothing factories in Canada has changed significantly over the past several decades. In the past, Canada had a thriving clothing manufacturing industry, with many large factories making clothing for both the domestic and global markets. However, over time, this clothing industry has declined due to a variety of factors, including increased competition from low-cost overseas manufacturers, changes in consumer demand, and shifts in government policies.

Today, the clothing manufacturing industry in Canada is much smaller than it was in the past, and many of the remaining factories are small and specialized, constructing high-end or niche products. These textile vendors, knitters, sample makers, hardware suppliers, and clothing factories are often located in urban areas, particularly in major cities such as Toronto and Montreal, where there is a larger pool of skilled labor and access to transportation and other resources.

However, even in these urban areas, the availability of clothing factories can be limited. Many of the remaining factories are focused on making high-end or specialized products, and may not be able to meet the demand for more basic or mass-produced apparel items. Additionally, the cost of labor and other expenses in Canada is generally higher than in other countries, which can make it difficult for domestic clothing manufacturers to compete with lower-cost world-wide producers.

Overall, while there are still some clothing factories operating in Canada, they are fewer in number and tend to focus on specialized or high-end products. This has led to a decline in the domestic clothing manufacturing industry, and an increased reliance on imported clothing. However, there are also efforts underway to support the remaining factories and encourage the growth of new ones, particularly in the area of sustainable and ethical fashion.

Get connected with a clothing factory or textile vendor in Canada today!

Finding a Clothing Manufacturer in Canada

Here at World Clothing Manufacturers, you can find all the essential clothing manufacturers in Canada. We are a one-stop shop for finding a clothing manufacturer in Canada, whether small businesses, retailers, suppliers, or designers. Search across the best suppliers in Canada to find the most suitable match for your business. Local sourcing is a rising trend that companies are turning to instead of seeking their suppliers abroad; World Clothing Manufacturers is playing our part in revolutionizing the apparel and clothing industry, and you can be a part of it.

Choose a city page in Canada: