Get connected with a clothing factory in Indonesia today! 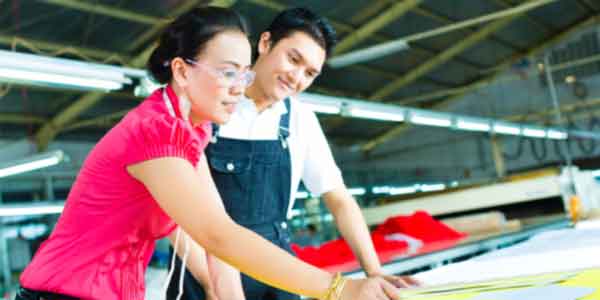 World Clothing Manufacturers (WCM) associates clothing and fashion designers with the most appropriate sample makers, textile vendors, knitters, hardware suppliers, and clothing factories in Indonesia. With years of knowledge and experience in the textile business, WCM fully understands the typical challenges and acknowledges that the clothing business is vast, often complex, and consistently inconsistent.

WCM has taken all those variables, simplified them, and put them in one convenient place, all to create a supply chain that is reliable, profitable, and easy to manage. Our goal is to assist fashion and clothing designers of all sizes by "bringing their ideas to life," and uniting them with the most fitting clothing manufacturers and other cut & sew product factories.

Small businesses account for 99 percent of all companies in Indonesia. To put it into numbers, we are looking at millions of businesses that are categorized as SMEs, that create millions of jobs on an annual basis; out of these, we have a rough estimation of tens of thousands of establishments that are categorized as clothing manufacturers for small businesses or retailers. The combined revenue of all the amounts as mentioned above to a staggering $186B.

Indonesia is a Southeast Asian country known for its rich culture and diverse natural resources. It is also one of the world's largest producers of textiles and clothing, with a growing number of sample makers, textile vendors, knitters, hardware suppliers, and clothing factories located in various parts of the country.

The availability of clothing factories in Indonesia has contributed significantly to the country's economic development. Many of these factories are located in major urban centers such as Jakarta, Surabaya, and Bandung, which are home to a large number of workers and resources. These factories produce a wide range of garments and other textiles, including traditional Indonesian batik fabrics, which are highly sought after by consumers around the world.

One of the main factors that have contributed to the growth of the clothing industry in Indonesia is the availability of cheap labor. The country has a large and growing population, which has made it an attractive destination for fashion and apparel startups looking to set up clothing factories. Many of the workers employed in these factories are paid low wages, which allows fashion and clothing businesses to produce garments at a lower cost. This, in turn, has made Indonesia an important player in the international clothing market.

In addition to low labor costs, Indonesia has a number of other advantages that have made it an attractive location for clothes factories. The country has a favorable climate, which allows for the cultivation of a wide range of natural fibers such as cotton, silk, and wool. It also has a rich tradition of craftsmanship, which has contributed to the development of a skilled workforce capable of fabricating high-quality garments.

Despite these advantages, the availability of clothing factories in Indonesia has also led to some negative consequences. Many of these factories have been criticized for poor working conditions and low wages, which have been a source of controversy and social unrest in the country. In addition, the proliferation of clothing factories has contributed to environmental degradation, as the production of garments requires large amounts of water and energy, and often generates pollution.

Overall, the availability of clothing factories in Indonesia has had a significant impact on the country's economy and society. While the growth of the textile business has brought economic opportunities and improved living standards for many people, it has also created challenges and raised concerns about labor conditions and environmental sustainability.

Get connected with a clothing factory or textile vendor in Indonesia today!

Finding a Clothing Manufacturer in Indonesia

Of course, if you just set out to find a suitable clothing manufacturer in Indonesia, it is likely that you won't have much success. Though there might be plenty finding the right fit for your business can be difficult and time-consuming. For this reason, World Clothing Manufacturers has made it easier with finding a clothing manufacturer in Indonesia. We do this by offering a collaborative platform for manufacturers and retailers where they can meet and do business.

Here at World Clothing Manufacturers, you can find all the essential clothing manufacturers in Indonesia. We are a one-stop shop for finding a clothing manufacturer in Indonesia, whether small businesses, retailers, suppliers, or designers. Search across the best suppliers in Indonesia to find the most suitable match for your business. Local sourcing is a rising trend that companies are turning to instead of seeking their suppliers abroad; World Clothing Manufacturers is playing our part in revolutionizing the apparel and clothing industry, and you can be a part of it.

Choose a city page in Indonesia: